I’ve had a couple friends make this recipe and tell me it was delicious and a must try; I haven’t made it yet but it’s on the menu for this week. I’ve been told it’s great made exactly as the recipe reads and another friend said it was delicious, but she would double the cream cheese and broth next time, mostly because she loves cream cheese. It’s sounds like you can’t go wrong either way. 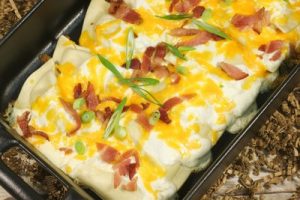